A team of researchers under Dr. Seetha Raghavan and Dr. Ranajay Ghosh has just returned from an experimental campaign at the Advanced Photon Source (APS) at Argonne National Laboratory (ANL).  The experiments encompassed three different projects, each making use of the high-energy synchrotron x-rays of the APS to investigate the microstructure and physical properties of thermal barrier coatings (TBCs).  TBCs are used to protect components in gas turbine engines from the extreme heat of combustion, and the team is contributing to their advancement in three areas. 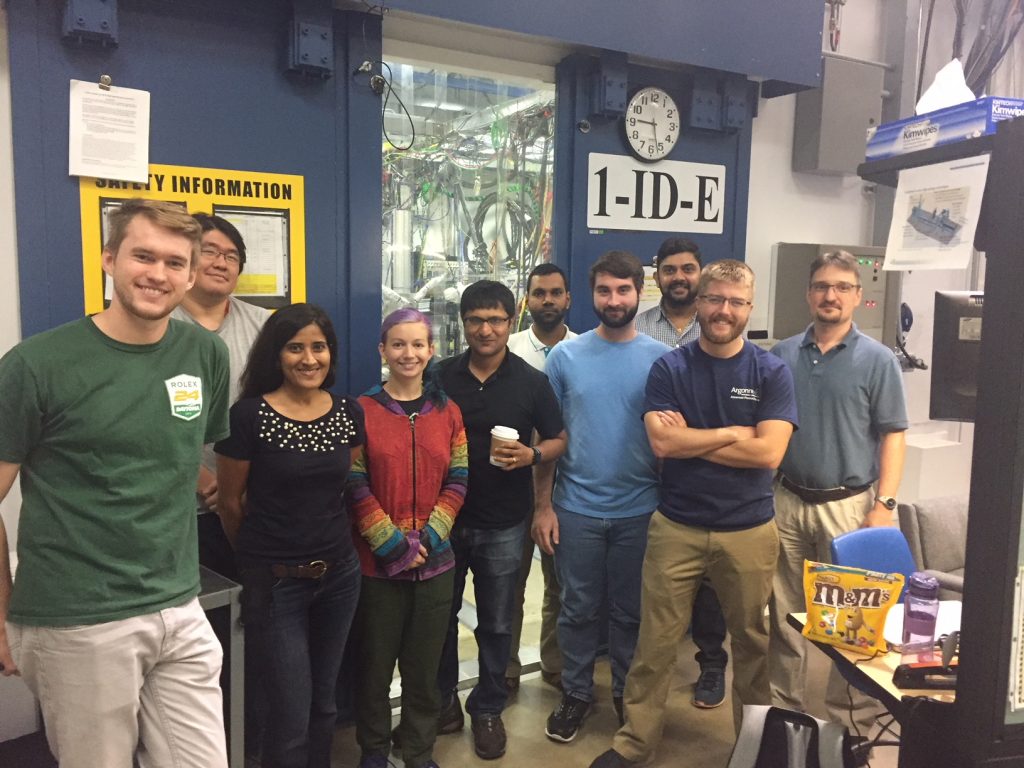 The project led by graduate students Matthew Northam and Lin Rossmann encompasses investigating the properties of thermal barrier coatings produced by plasma-spray physical vapor deposition, a new and promising manufacturing method that may be more customizable and cost-effective than the current techniques in industry.  This project is in collaboration with Dr. Bryan Harder of NASA’s Glenn Research Center; Matt and Lin visited Glenn in the spring semester to manufacture and begin testing these samples with Dr. Harder.

Postdoctoral fellow Sandip Haldar and graduate student Peter Warren led a Department of Energy-funded study on thermal barrier coatings doped with the rare earth element europium.  Rare earth elements fluoresce when stimulated with certain wavelengths of light, and the duration of this fluorescence is dependent on temperature.  A major objective of the DoE project is to implement rare-earth-doped TBCs such that the temperature inside an engine can be measured non-destructively and optically.  The study performed at ANL will provide insight into how the addition of europium affects the mechanical properties of the TBC.

Undergraduate student Zachary Stein led a study investigating the effects of sand and ash on thermal barrier coatings.  Fine debris like sand, dust, and ash causes damage to the TBCs in aircraft engines and shortens the engine lifetime, so understanding the nature of its effects is important to improving future coatings.  This project is in collaboration with the German Aerospace Center (DLR), and DLR postdoctoral fellow Dr. Ravi Naraparaju joined the team for a day to discuss the project with Zac and Dr. Raghavan.